The History of the Greybull Hotel 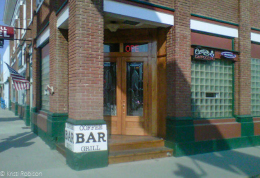 In 1914, construction began on the Hurst Building with the First State Bank being the original occupant. This was the ﬁrst and largest brick building built in Greybull. The oil boom was in full swing, and the investors wanted to make a statement about coming prosperity.  Then came the Great Depression, and the bank failed in April 1927.

Joe Carey purchased the building at that time and launched a number of enterprises. One was a Speakeasy in the basement that was a nest of Rum Running - moving illegal liquor rom Canada during Prohibition Period until 1933. Joe Carey was colorful character and there are many stories about his rum running days. One story is about liquor run gone bad. Joe’s brother and friend went to a pickup spot near 2 Dot Ranch only to be met by Federal Agents. A shootout ensued, they ﬂed but the friend was dead in the back seat. After they dropped off the liquor, they dropped of the friend at the funeral parlor. The tunnels have all been closed off, but you can see remnants in the concrete where they used to be.  Local stories abound about the tunnels connecting the bars and hotels underground to move the illicit liquor once it was brought in.

The hotel opened in 1926 and it is rumored that the back corner housed the “Ladies of the Evening”. Joe and Clair Carey owned the building and pretty much the whole block for years. Joe died in the 1980s, and Clair lived in the hotel until she sold it in 1994.  As in many older buildings, there have been sightings of spirits or ghosts in the hotel - but they are all friendly spirits.

Joe also had a Packard dealership and ﬁlling station for the tourists going between Yellowstone Park or Mount Rushmore. Bob’s bar was a ﬁxture on the corner for years, changing to the Hangin’ Tree Bar until the late 1970s.

Myles Foley and Lori Davis bought the hotel building in 2008, and are bringing back the feel of yesteryear with modern amenities. The Speakeasy and the Hotel were completed in 2011, and we have enjoyed creating meals and hosting guests since then.